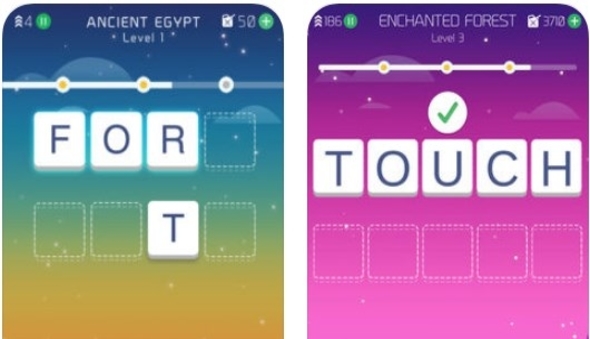 At last, the Russian game studio Crazy Bit brings everyone’s favorite zombie animals back to the App Store with Zoombie Digger World Tour! Featuring new weapons, levels, and zombies, Zoombie Digger: WT is everything we loved about the first Zoombie Digger with improvements to the gameplay and the content.

Once again, it’s a “tower defense game” – the player must protect cities from waves of funny, adorable zombie beasts. Bury them, blow them up, shoot them to pieces, and annihilate them with various super weapons! Players won’t just face the familiar zombie bosses, but the new mega-zombies, as well: Puddles, the Panda, and even Bin Laden himself!

The “World Tour” title is not a gimmick. The player now must protect the great wonders of the world from the zombie animals! Wonders like the Egyptian Sphinx, Japan’s White Heron Castle, the Sydney Opera House, Rio de Janeiro’s statue of Christ, Moscow’s St. Basil’s Cathedral, and Mexico’s Chichen Itza, all in the free first 24 levels! After this journey, players can open 60 more levels for $0.99. There they’ll find the great sites of the United States – the Statue of Liberty, the White House, Mount Rushmore, and more. 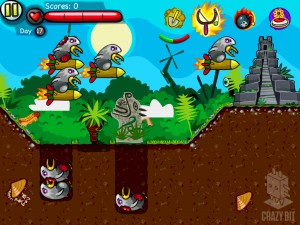 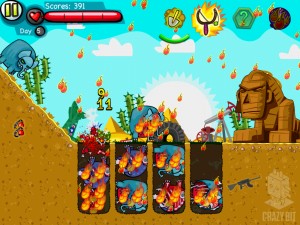 Don’t think you’ll get all of these levels right away, though! To unlock levels, you must collect skulls from earlier levels. The faster you complete a level, the more skulls (from 1 to 3) you’ll get. For example, to open the second city in the paid expansion pack, you need 94 skulls. Try not to miss a single zombie animal!

Not all weapons are immediately available either. Some can only be used after they’re unlocked later in the game.

In this release, the developers focused on the most extreme players. Now you can get combo points by burying several of the same kind of monster in a row, killing several monsters wielding the same kind of weapon, blasting them in the air, or taunting them! After you complete each level, your points turn into money, which you can use to buy more powerful weapons.

The graphics, just like the first game, are insane. They’re bright, a little wild, and very cool.

In summary, if you’re already a fan of those lovable zombie animals, “Zoombie Digger World Tour” is a must for your iOS device (available for iPhone, iPad and iPod Touch). And if you still haven’t tried anything from Crazy Bit, then this is the perfect time!