Tens and Twos for iPhone and iPad is an addictive fast paced classic card game. It brings together a plethora of neat high-resolution graphics and simple but effective colours. It also had a nice line in melodies playing and cool, funky sounds. Recently the latest version 1.3.1 was released. There is also the promise of more add-ons to come. The user will be forgiven for thinking this game is easy at first. It is simple to play and easy to pick up but like chess or draughts or any standard card game, it can be very difficult to win. 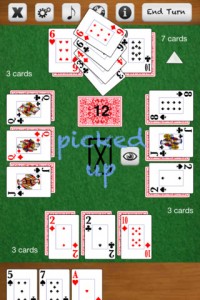 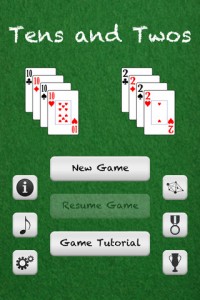 There are so many settings that give this app a new edge; by adjusting the settings on the number of players and decks you can make this game a real challenge. You can even interact with friends and family online and create your own league table leader board. This is the part that really does prove interesting as you could effectively get all your work colleagues to join you on line and then all play against each other in a league table format.

There are said to be 21 achievements to earn and there is plenty of time practise before you go online and join in a league. I found the intelligent computers you can be pitched to play against are very challenging and good practice for the novice user to get ahead of steam up in the game. Game Center allows you to share your achievements. The other plus point I have to point out is there are no advertisements.

The additional advantage I found in the Tens and Twos game is that is gives you clear instructions and tutorials. This came as a real bonus to those who were playing the app for the first time.

Playing card games against opponents on a long coach trip journey was extra special. I recently headed up on a long coach trip from Manchester to Glasgow in the UK. The journey time was linked at six hours and I had downloaded this app and played some great card games against a work colleague along the way. Before I could look out the window and view the northern England dales and countryside I found myself crossing the Scottish border, well over four hours into my journey!

This goes to show that playing Tens and Twos on your iPhone is so consuming that time itself passes you by.

Since antiquity, man has awaited the arrival of an application that would bring card games on iOS to new and extraordinary heights. Now an old favorite has done just that, for Tens and Twos has arrived for iPhone, iPod Touch, and iPad. Featuring high-resolution retina graphics, intelligent computer players, and upbeat music and sounds, the player is completely immersed in the gaming experience.

Not sure how to play? Don’t worry! Tens and Twos is simple to play and anyone can pick it up. There is an interactive tutorial provided to learn the strategies and rules of the game. In addition, clean and crisp animations throughout the game provide an easy way for the player to follow in-game play.

Think this game is going to be TOO easy? Think again! There are numerous settings that give this simple game a new twist. Try changing the difficulty of the game by adjusting the settings for the number of decks and players.

With Game Center integrated into the application, Tens and Twos is open to the entire world. There are 21 achievements to earn, and leaderboards to climb so you can compete with your friends online.

Not only can you play it on your iPhone, but also on your iPad using the same app!