Squash is a new take on the ancient bat-and-ball video-game, spanning back to the young Atari consoles. While the Atari classics are still around in someone’s wardrobe, somewhere, they have been out-dated and new and improved versions have come out. Now, bat-and-balls games are something of a pastime, but the developers of Squash wish to change that, by releasing another bat-and-ball game.

The game, named Squash as a reference to the sport squash, is a ten-level race to gain the highest score possible, by taking on a multitude of different balls, all of which have a unique spin on making the game hard. The first three are okay, but afterwards you’ll find balls that can travel in different ways to a normal, balls that stop mid-way and come back down and then you get multi-ball per level, which makes it terribly hard. 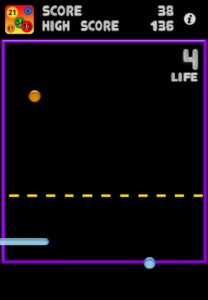 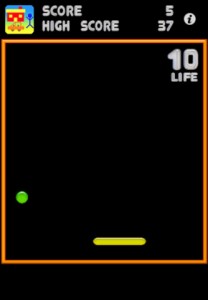 Objectives on this game are straightforward, get 100 out of 100, then get 200 out of 200, how do you do this? By not letting the ball run past you once, and completing every level to one–hundred-percent. This may sound easy, but once you start losing your grips at level five, it begins to become a nightmare. It took me half an hour before I even hit ninety percent and I was still losing the ball on level 5.

Even though the game does sound fun, it is hit with a low quality and dull interface; there could’ve been something to spark life back into this old game, instead of making it more retro. Interactivity is not on the game, unless you count not having to use navigation and being able to use the touch-screen as interactivity. I would have like to have seen defence or help on your side.

At the start you are also pushed with a notification offering you a once-in-a-lifetime opportunity to download an app, this notification will come up every time you open the game, I found this horrifically annoying, as it was one of those ads that look too spammy to even touch.

Overall, the game delivers on excitement and fun, and that is all that matters really – they could do some work on the interface and just making the game more 21st century, instead of Atari style gaming.