Animation Desk is an app that allows your creativity to run wild. Rather than telling you animation is a tool that takes years of practice to understand, this app puts you right onto the drawing board. Truly; “anyone can be an animator”.

Even though it isn’t exactly a Pixar-worthy animation studio, it is a solution for those that don’t want to pay £200 for an animation application, but want to get started with some basic designs. Newbies will have to work around the apps rather barren amount of instructions before getting to know each individual feature, although once you’ve grasped the concept of the site it becomes clear how easy making an animation is. 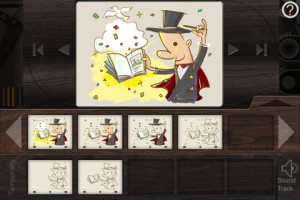 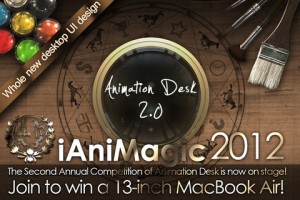 There is an expansive amount of colours, brushes and different shades that you can create to animate. These tools can be found down the right side and simply change once you’ve pressed it. One point we found while looking around the app was that this would be much better in tablet form – the mobile display is too small and you can sometimes being tapping the screen for a few times before the command is noticed. We don’t think this is anything to do with the apps functionality, but more to do with the size of the screen and how compact all these features are.

Toolbars and scene sliders help the animator check and edit their scenes – we found both of these to be functional, if not a tiny bit compact due to the iPhone 4S’s small display. The scene editor is found on a little board on the left side, which looks incredibly well built in to the app animation desk. Scene editor allows you to add audio to the animation you created and check out every part that you have created.

Overall, for a cheap app that is from August 30 to September 3 free, we found that it was one of the better animators in the Apps Store. Functionalities and the vast quantities of the app make you feel as though you are a professional, and it doesn’t take much more than a creative mind to make a brilliant scene. See Animation Desk in action here. The developers have launch their second annual Animation Desk competition, get a chance to bag yourself some huge prizes. See more details on their site.