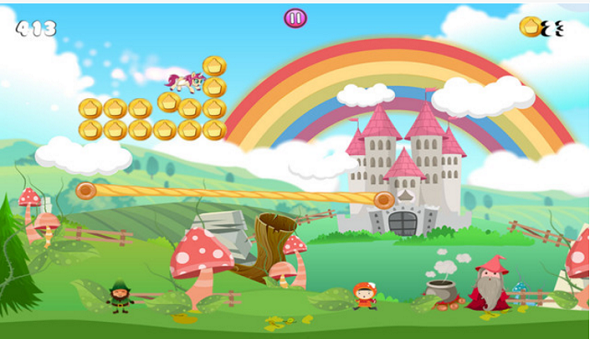 If there has ever been a timelier app for your iPhone, iPad or iPod Touch then Tiny Election is a fun and silly way to take the seriousness of an American presidential campaign out for a breather. This topical app will put at stake the survival of your vote. You can play either as President Barack Obama or Mitt Romney in a different twist on the great battle to get into the White House.

The idea is to sling your candidate and gain points to rack up a victory by gaining the highest score. To give yourself and your candidate a better chance for victory you need only unlock additional party characters. In the comical app the Democrats will have Barack Obama (naturally) and a donkey as well as Joe Biden, Hillary Clinton, Bill Clinton, Al Gore, President Kennedy and President Franklin Roosevelt. In the Republican corner you will have Mitt Romney (of course), an elephant, President George W. Bush, President Ronald Reagan, President Abraham Lincoln, J. McCain and Romney’s running mate Pat Ryan. 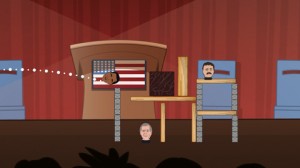 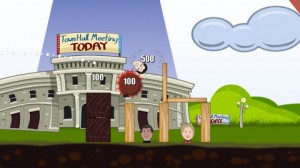 Tiny Election is a comedy cartoon style election laugh which will task you to try and earn votes to the candidate of your choice and then follow the worldwide results in real time. In the app you will see a feature displaying informative, real-world voter resource links and a voter registration link designed and engineered by Rock the Vote, which will help make your vote count.

There are more than 16 comical characters to choose from and your will find yourself playing through four different worlds or realms which are the White House, Presidential Debate, Washington D.C. and a Town Hall. Tiny Election is a fun and comical twist to the Angry Birds app and is very much a topical app to play just as the rest of America drift home from the polls after casting their vote and sit back to watch the Election Night Special on all the world news channels.

While the rest of America pulls an all-nighter in front of the news channels, you can make a laugh and joke of it all with Tiny Election. Choose which President you want to play – Barack Obama for the Democrats or Mitt Romney for the Republicans and take on a lighter note of the world’s most important election. Tiny Election is a slice of comical fun and is ideal for households where there is Republican and Democrat voters are living under the same roof.