The battle for Middle Earth is up and running and you can play this superb game app for free. You will play alongside thousands of other users worldwide trying to drive the evil goblins away from the land of the Misty Mountains. Your help and assistance is needed to nullify the threat of the goblins as do battle alongside Bilbo Baggins, Thorin and Gandalf the Great. The Hobbit – Kingdoms of Middle Earth is a combat strategy game where you will play as a dwarf or an elf. You have to build up your city and destroy the threat from the goblins.

Gandalf, Bilbo, along with the others playing around the world, need your help to combat the goblins. There is only one problem to overcome while battling the goblins, there is bad blood running and a uneasy truce running between the dwarves and the elves. There is a huge system of multi-player strategic action game play on offer here. You will join, literally thousands of other players who are online playing and build alliances with diplomatic leaders in a quest to get them on your team. 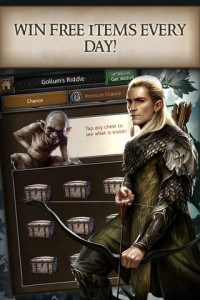 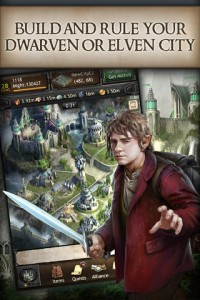 You will train armies to do battle against the goblins and subsequently conquer your enemies across Middle Earth. You can strengthen your city by upgrading buildings so making them more of a fortress. In The Hobbit – Kingdoms of Middle Earth you also upgrade your weaponry to make you more adept at beating the goblins.

You can even interact with other players around the world by chatting to them live. When you chat you and your accomplices can plan strategies and make combat plans to see off the goblin threat. You can swap ideas and get tips from other players. The Hobbit – Kingdoms of Middle Earth allows you to participate in other tournaments to gain valuable rewards.

There are several different factions about the game play in The Hobbit – Kingdoms of Middle Earth where you can play as an elf or a dwarf, you can have unique buildings, troops and will see out quests to combat the threat of the goblins.

In The Hobbit you can attract the assistance of heroes like Legolas and Thorin Oakenshield, who both have experience in leading troops. The terror of Mirk Wood awaits you, so you must conquer this threat too. The Hobbit – Kingdoms of Middle Earth is compatible with the iPhone, the iPod Touch and the iPad.

iPhoneGlance Rating of The Hobbit: Kingdoms of Middle-earth [rating=4]

Title: The Hobbit: Kingdoms of Middle-earth