Prohibition War: Mobsters, Mafia families and Turf Wars in Gangster City apart from being quite a mouth full it is a real player game that is highly addictive and takes you back to a time when alcohol was prohibited and mobsters, mafia families and regular turf wars ruled the streets of the city. You will need to become a big time gangster yourself in this “kill or be killed” kind of game.

You will build your own gangster world and hire mob members to work for you in your team. Your crew must grow and eventually dominate Gangster City. You will get the opportunity to select your own class and family members to join in on your crew, so select wisely as certain classes have great benefits that others don’t. That said, all classes have their own benefits, so it’s best to choose one you know you’ll be comfortable with. 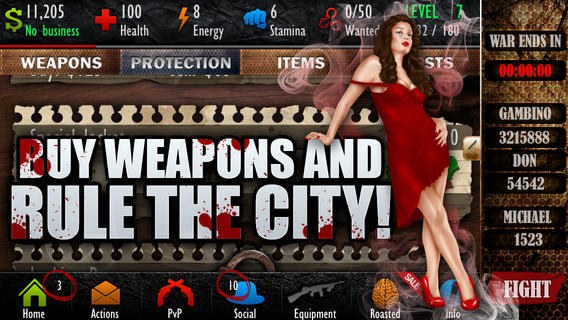 Once you have started to develop and grow your own character and crew, you can then go out and spy on other gangs or crews. Information gathering is always important and you could even be spied upon yourself. You will do some real pitch battles set right in the heart of the Great Depression era when times were tough and money and moonshine were controlled by large swathes of mobster men and mafia families.

You can even recruit your friends so as to build the strongest and most powerful crew in the city, and it’s possible to climb up the ladder to the top and collect achievement awards, which will eventually allow you to use against your enemies. The aim is also to achieve and build up items like weapons, only gathering more weapons means killing more rival mobsters.

Prohibition War is also about running a business. The mafia, mobsters and turf wars that existed the time of the Great Depression were mainly centered on the protection money racket, drugs and bank heists – and of course stealing off other mobsters was common place too. 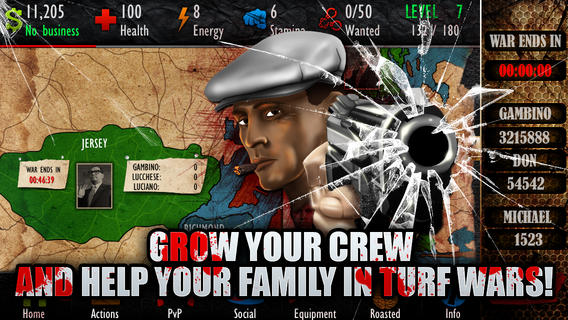 Prohibition War is a game where you will see how much cash you have accumulated, the state of your health and the levels of your energy, all of which are displayed out on the screen. You can play against other players from anywhere in the world in a PvP environment, or just simply play against a friend. You will need to register online first however, so iPod Touch users must have a Wi-Fi connection to play.