Anyone else notice Facebook’s gone down the pan recently? I don’t think it’s just me; a lot of my friends have jumped ship, and more still seem to not bother with it at all these days. It’s just a deluge of tenuously-linked advertisements, clickbait and shared articles. No one seems to write statuses anymore; they either just share or self-promote. I’m more than guilty of the latter, but even having said that, I deleted the Facebook app from my phone the other day. It just seems a bit…tired. So, despite not actively seeking out an alternative, one seems to have landed in my path anyway, and it’s intriguing; it’s called iSpark, its function is being the middleman of social interactions and it’s out now for Android. But can this new kid on the block topple the well-established giants of social networking?

First off, what does it do different? Well, a lot, as it happens. Acting as a sort of platonic Tinder, or indeed a more confident and outgoing Facebook, iSpark allows you to have genuine, flesh and blood experiences with other humans, in real-life. Note the word platonic; iSpark is more about bringing people together for social activities, and less concerned with the seedy underbelly of online hook-ups. For starters, it’s not strangers who you’ll connect with necessarily; you build your new social network from the foundations (or shattered ruins as the case may be) of your Facebook or Google accounts.

Once you’ve got that set up, you can start meeting up. You tell iSpark what you’d like to do in terms of an immediate activity. For example, you might declare to the app you feel like a cup of coffee. iSpark then uses an extremely clever algorithm to find people who have similar hankerings for caffeine, within a 1.8 mile radius of you (or more precisely, your phone). Once you’ve selected a potential coffee partner, you can invite them to go with you; or, having put the word out, you might receive an invitation from them. Your ‘status’ stays live for seven hours; during that time you can contact, or be contacted, by anyone in a similar mood.

It’s a good idea – no, it’s a great idea, especially with Facebook on the decline (at least in my opinion), and I love the fact it brings people together for face-to-face encounters. But of course, the app lives or dies on a large number of people using it; nobody wants to be stuck constantly dodging invitations from Billy No-Mates, the one lone sole out there responding to your regular dispatches for coffee. But on a large scale, this is a hugely viable app, revolutionary even – the developers state they’ve got a successful response so far, and I urge you to download it now and get it working for us all. iSpark does a great job of highlighting the ‘social’ part of social networking; the next step would be to drop ‘networking’ altogether and just be ‘social’. Imagine that.

Put the call out to Google Play and get socialising for free today with iSpark! 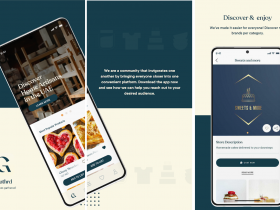 Gathrd – Shop in the UAE from Home Businesses