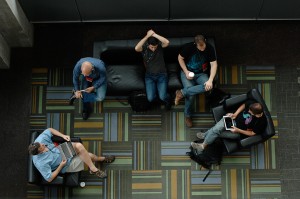 Online gaming has been on the rise for the last twenty years or so, with a major explosion occurring in the mid-2000s with the release of heavy hitter MMORPG World of Warcraft. Since then, online games have become a staple of video game culture, and are starting to become the defining iteration of modern day video games in the minds of developers and players alike. They span all devices and genres, from epic RPG quests on the PlayStation 4 to mobile casinos on the latest iPhone. So, what’s the big fuss about, and why are so many people hooked on them?

Any good video game is addictive; we’ve been aware of that fact since Space Invaders. Indeed, addiction is the name of the game when it comes to contemporary gaming apps for handheld devices. But online gaming carves itself a special niche in the wasteland of addiction. Because you’re playing with or against strangers, the thrill is increased tenfold. There’s a real person at the other end of a screen somewhere, and for a few minutes, hours, even days, they can transform into your deadliest rival or your closest ally. Online gaming is fun, it’s unpredictable. If you incorporate it into an already addictive game, you’re going to be on to a winner. People will always love playing against other people, even if they can’t see them. I mean, video games are competitions when all is said and done.

Developers know that their online community is precious. The players are often subscribers, or at the very least, constant players. They like to reward this loyalty with added content or incentives, which works both ways. Players are keen to get their hands on fresh features for their favourite game, while developers are only too happy to take their money for said features. The term for this is DLC (downloadable content), which usually come in the form of extra characters, stages, or missions. Just a couple of days ago, Nintendo released the DLC character Ryu, of Street Fighter fame, for their 2014 hit Smash Bros. WiiU. Despite costing £4.99, the demand among players was so great that the Nintendo eShop servers crashed for several hours. On the other end of the spectrum, some online casinos offer bonuses. For example, at Netbet Online Casino you can claim up to £250 free bonus once you sign up with them. Whether it’s incentives like these, or content like Ryu, online players know that they are valued and the developers are committed.

That’s right. The biggest hook of all is that online gaming is limitless. World of Warcraft has been going for over ten years now, and just topped 7.1 million players as of last month. Of course, WoW is the model that brought online gaming into the main stream, and now even handheld devices are capitalising on the MMOPRG hook. The online casinos are always open, day or night. There’s always someone to fight in Tekken, or some gang of ruffians to go on a heist with in GTAV. Traditionally, games had a shelf life of a few hours to a few days, depending on how fast you played, with only the best of the best having any sort of replay value. That’s a thing of the past. As the internet gets faster and more entrenched in our culture, so online gaming will continue to dominate. The above factors prove why it’s such a big hit with casual and hardcore players alike, across every genre going. Online gaming is here to stay.