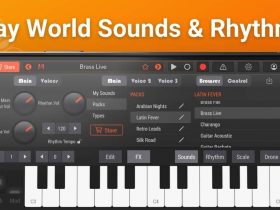 World Piano – The Must Have App for Every Musician

Several years ago, Apple’s now-deceased founder Steve Jobs refused to permit the use of Adobe Flash on iOS devices, citing that HTML5 technology could do everything that Flash could and more. Most people believed Jobs was shortsighted in his decision, but time has proven him to be correct. Today, HTML5 underpins the open web platform that we have all come to know and love, but what is it and how is it fostering the development of more powerful and diverse websites and web applications?

HMTL5 is the newest version of the Hypertext Markup Language, the code that outlines how web pages look and feel. It comprises these different types of code: HTML which sets the structure and format of a web page, Cascading Style Sheets (CSS) which handles how a web page appears visually and JavaScript which oversees the execution of a web page. It has existed for several years, even after its official adoption back in October 2014. The outcome of HTML5’s adoption was that websites and web applications became significantly less reliant on proprietary rich technologies, such as Microsoft Silverlight and Adobe Flash, which required embedded plug-ins that were a drain on computing resources.

By using HTML5 technology, web developers no longer require additional software such as browser plug–ins. It can visualize and execute everything from live–streamed audio and visuals to on-page animations and browser-based applications. Its capabilities have seen Adobe opt to end its support for the Flash Player for mobile devices. It’s also a cost-effective solution for web developers, too, given that it is open source and not proprietary, with no need to pay royalties to utilize its features. Today, HTML5 code powers web applications that even work when a user is offline.

It’s critical to add that HTML5 technology evolves continually, with incremental improvements available slowly but surely, including a range of fixes to internal bugs and the development of brand-new features. Version 5.1 was as a revision to the canvas 2D elements of the HTML5 code. Version 5.2 aimed at making e–commerce swifter and more secure while rendering the plug–in system obsolete. The upcoming Version 5.3, which is still in draft format, will likely introduce new elements based on authoring practices and interoperability. So, with so many developments made to HTML5 technology all the time, what industries benefit the most from this cross-platform language of the World Wide Web?

HTML5 has changed the face of eLearning as we know it, becoming the gold standard for said platforms, with the ability for training programs to reach a wider audience. Previously, eLearning platforms often relied upon Adobe Flash, but this has not received support from any of the leading smartphone devices for several years. Now, you can access HTML5 eLearning courses on these platforms, with smart meta-tags capable of optimizing course material for consumption on any mobile or desktop device.

In the world of iGaming, where people increasingly play video slots and traditional casino table games on mobile, the leading software developers are rapidly converting their most popular games into HTML5. In doing so, the leading real money iGaming apps now offer consistent, responsive user experiences, regardless of the device. So, it doesn’t matter whether you have an Android or iOS-powered smartphone or tablet, HTML5 technology ensures the same gaming experience on video slots or table games as you’d get on a desktop or laptop. It has also helped to usher in the technological advances of virtual reality and augmented reality to allow iGamers to play in a simulated casino environment.

HTML5 technology is also having a significant impact on the world of industrial manufacturing, with the fluidity and agility of HTML5 helping to revolutionize human-machine interface (HMI) platforms. In the past, industrial manufacturers have felt left behind by vendors that adopted HTML5 early, ditching archaic software solutions powered by ActiveX or Visual Basic for Applications (VBA). However, these solutions are now outdated, as they are overly intensive on company resources. The beauty of HTML5 is that it allows interfaces to transcend all desktop and mobile devices, creating a universal standard for warehouses worldwide.

HTML5 has cemented the open web platform in many other 21st–century industries. And as a result, it has become more than HTML, with the code helping to create more secure, high-performance environments than ever before.