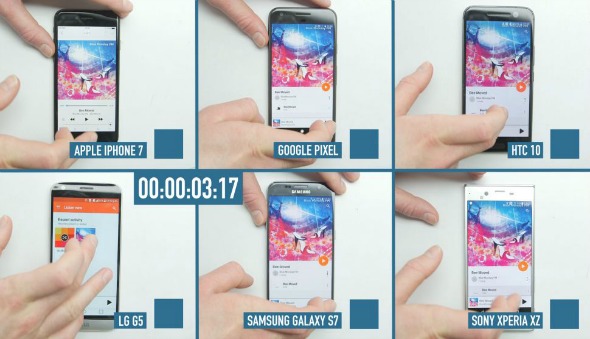 TechRadar Decided to Test the Speed on 6 Phones Including iPhone 7, Samsung Galaxy S7, Google Pixel and More. Wonder Which One is the Fastest?

Each year, it’s a challenge for Apple to release a new iPhone that matches or surpasses existing Android flagships in the market. Without doubt, the 2020 model of iPhone will come with new upgrades. But this time, the source is none other than Samsung, its biggest competitor in the smartphone industry. For Apple, Samsung isn’t only a major competitor, but also an important supplier of components. Every February, the South Korean company announces its next generation of display, which will be used by the upcoming iPhone model that same year.

Furthermore, Samsung has announced the next-generation LPDDR5 RAM modules, which are optimized for 5G-capable smartphones. Samsung confirms that these modules have 20 percent better energy efficiency and 30 percent faster performance. At 5,500Mbps, the LPDDR5 is about 1.3 times faster than the previous LPDDR4X that runs at 4,266Mbps. LPDDR5 will be delivered as 16GB modules that are adequate for any flagship model, including the next iPhone. As for the new display, it’s an OLED panel optimized for 5G smartphones with lower power consumption and reduced blue light emission. Samsung states that the new display is intended for economical power consumption, distinguished designs and crystal clear imagery.

Samsung further explained that the new display emits 70 percent less blue light, compared to previous LCD panels and it’s also 15 percent more efficient. At the moment, Apple has been investing in LG’s OLED technology heavily to diversify sources of their parts. The next iPhone should also have high refresh rate, like the ProMotion technology used by the iPad Pro. The powerful A14 Bionic chip is a very powerful mobile CPU and it’s a waste to use a display with just 60Hz refresh rate, if A14 Bionic SoC manages to generate high fps.

Samsung’s Galaxy S20 variants still can’t beat iPhone 11 in terms of performance, because the Exynos 990 and Snapdragon 865 are not as fast as Apple’s Bionic A13 CPU. However, the S20 models have distinct advantages on other areas. While the iPhone 11 still has 4GB of RAM, the best variant of Galaxy S20 offers up to 16GB of RAM. Apple has never been to keen on surpassing the amount of RAM of other flagships, because they are capable of optimizing the hardware significantly to ensure iOS works at highest capacity.