With the rapid development of mobiles and connectivity, it’s not surprising that more of us are likely to spend longer sessions on our devices – but just how much time are we really spending?

Telecommunications experts at Uswitch.com have delved into screen time research around Brits’ habits, highlighting that, over the last two years, we’ve increased our time focused on our screens by an average of two hours, from three hours to five hours daily.

Where are we spending the most time? 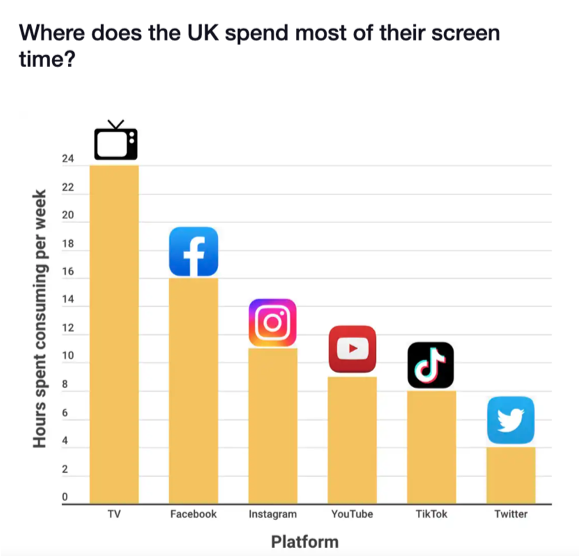 Which age group is spending the most time on their devices?

While it’s not surprising that younger age groups are spending less time watching TV and more time scrolling social media, those aged 16-24 were found to be spending the most time on Instagram. Almost one in 10 people within this age group spend seven hours a day on Instagram, which equates to 2,555 hours a year scrolling!

The research found that Millennials are more actively setting screen time limits, with almost half of those aged 25 to 34 setting daily caps.

Who is spending the most time?

When it comes to set screen time limits, men tend to spend an extra hour on their screens each day, limiting themselves to four hours compared to three hours for women.

Women were also found to spend more screen time on social media apps like Facebook and TikTok, while men preferred their screen time focused on the TV. From the apps men did spend time on, it was surprising that Twitter, TikTok, and dating apps ranked highly.

When do you know your screen time is too much?

The study found that the most popular screen time limit in the UK is four hours, with one in five limiting their cap to this.

Experts have mentioned that the average screen time should be around two and half hours a day, meaning Brits would need to cut down on almost more than half to reach this.

Increased amounts of screen time can have a mental but also physical impact on your health, including loss of focus and eye fatigue. If you notice any of these symptoms, it’s best to rest your eyes from your screens. However, if you can’t, resting your eyes every 20 minutes can help, maintaining focus on something around 20 feet away for 20 seconds at a time.

If you’re looking to reduce your screen time or the effects, here are a few tips to help: